Scenarios from the Special Report on Emissions Scenarios (SRES)

The Special Report described around 40 different scenarios of greenhouse gas emissions. For the CMIP3 experiments, most modelling groups used just three of these: B1, A1B and A2.

The B1 scenario describes a convergent world with the same low population growth as in the A1 storyline, but with rapid changes in economic structures toward a service and information economy, with reductions in material intensity, and the introduction of clean and resource-efficient technologies. The emphasis is on global solutions to economic, social, and environmental sustainability, including improved equity, but without additional climate initiatives.

The A1B scenario describes a future world of very rapid economic growth, low population growth, and the rapid introduction of new and more efficient technologies, with a balanced emphasis on all energy sources. Major underlying themes are convergence among regions, capacity building, and increased cultural and social interactions, with a substantial reduction in regional differences in per capita income.

The A2 scenario describes a very heterogeneous world. The underlying theme is self-reliance and preservation of local identities. Fertility patterns across regions converge very slowly, which results in high population growth. Economic development is primarily regionally oriented and per capita economic growth and technological change are more fragmented and slower than in other storylines. 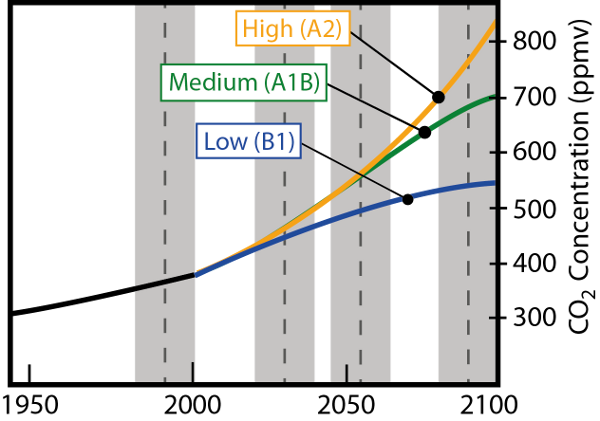 Four RCPs have been defined and these are labelled according to the radiative forcing (W/m2) associated with that particular pathway by the end of the 21st century:

The high emission scenario, RCP8.5, represents a future with little curbing of emissions, and these have consequently not stabilized by 2100 with resultant forcing close to that of SRES A1F. The higher of the two intermediate emission scenarios represent emissions lower than those of RCP8.5, due to implementation of some mitigation strategies, with stabilization reached shortly after 2100. Whilst RCP4.5 describes somewhat higher emissions than RCP6.0 until the mid century, it peaks earlier and reaches stabilization towards the end of the century at lower levels than RCP6.0. The low emission scenario describes emissions that peak early in the century (around 2020) and then rapidly decline, implying a future with very ambitious and sustained emission reductions. For further details on all RCPs we refer to Section 3.2 in the Technical Report. In Climate Futures, only the CMIP5 models can provide data using the RCPs. 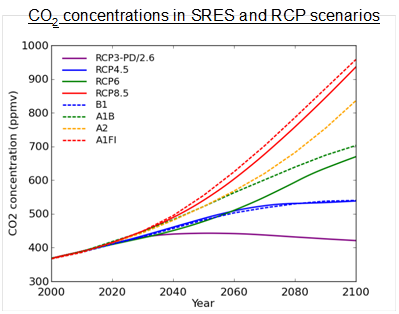