Global warming levels are one of three 'lenses' of thinking about the future climate, also called ‘dimensions of integration’:

Global warming level projections are the change in the climate of Australia when the global mean surface temperature (GMST) is consistently at a temperature ‘level’ warmer than a pre-industrial climate: +1.5, +2, +3 and +4 °C.

The timing of reaching global warming levels depends on three factors: 1). the global greenhouse gas and aerosol emissions, 2). the strength of the response to greenhouse gases (known as climate sensitivity) and 3). climate variability. The world may temporarily reach +1.5 °C in the next few years and may be steadily at or close to the +1.5 °C global warming level sometime between the late 2020s and the 2050s, depending on these three factors. There is an estimated window for reaching other global warming levels for each emissions pathway the world may follow. See Reaching Global Warming Levels for more.

Australia has warmed by more than the global average (land and ocean), and similar to the global land average: 1.44 ± 0.24 °C since 1910 and likely around 1.6 °C since 1850–1900, with the coastal regions warming less than inland. See Australian warming for more.

The annual temperature of Australia and most regions within Australia is now consistently warmer than the range it would have been in a pre-industrial climate, this is known as climate change ‘emergence’, see Emergence for more.

There are various methods to make global warming level projections, we use the ‘time sampling’ method, see Methods for more. 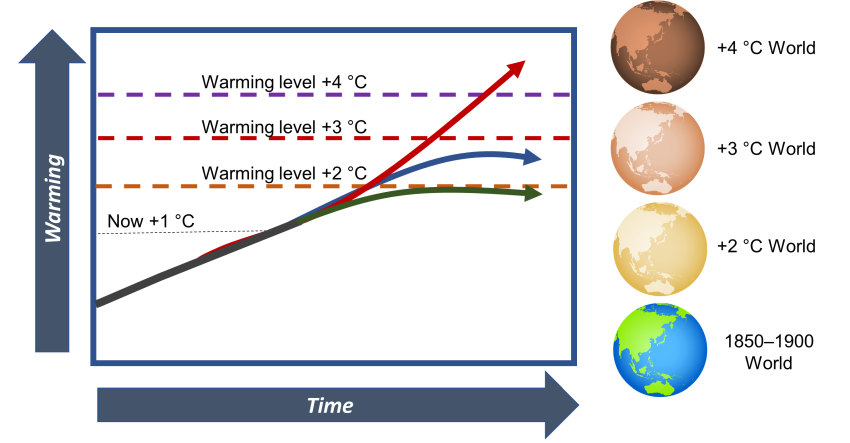